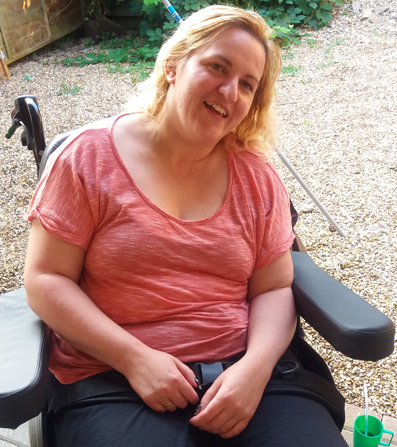 Dementia can strike younger people as well as the elderly. Mum of two Carla Bramall developed symptoms at the age of 30 and was diagnosed at the age of 36. She is now 39 and living in a nursing home. Christina Macdonald reports

We often think of dementia as a disease that affects mainly older people, but there are over 42,000 young people in the UK diagnosed with young onset dementia. According to Young Dementia UK, they represent at least five per cent of the 850,000 people living with dementia in the UK. Dementia is described as ‘young onset’ when it affects those between the ages of 30 to 65. Awareness of the disease in younger people can be low among GPs, and it is suspected that the true percentage of young people living with dementia could be between six to nine per cent, as some may be undiagnosed. In some cases, symptoms of dementia in younger people are mistaken for depression or stress.

Familial Alzheimer’s disease is a form of dementia that can be inherited. Alzheimer’s Research UK says that researchers have found three faulty genes known to cause early-onset inherited Alzheimer’s, though others may be yet to be discovered. The three genes are:

‘Someone who inherits one of the three faulty genes known to cause familial Alzheimer’s is virtually guaranteed to develop the disease,’ says Dr Laura Phipps, Head of Communications and Engagement at Alzheimer’s Research UK. ‘Their children have a 50 per cent chance of inheriting the gene and developing it too. There is some evidence that early-onset Alzheimer’s may progress faster and more aggressively (than dementia in an older person), but experts are unsure whether this is conclusive. Every person’s experience is different and there can be a huge variability in people’s response to the disease. Difficulties with diagnosis may mean that people are diagnosed later, making their progression seem faster.’

Alzheimer’s Research UK is funding a range of projects to understand more about young onset dementia. ‘This includes studies to understand the faulty genes that cause inherited forms of Alzheimer’s and frontotemporal dementia, as well as research discovering new genes linked to these diseases,’ says Dr Phipps. ‘Our researchers are also working hard to understand why some people with no family history of dementia still develop the condition at a younger age, unpicking the complex genetic and lifestyle risk factors.’ 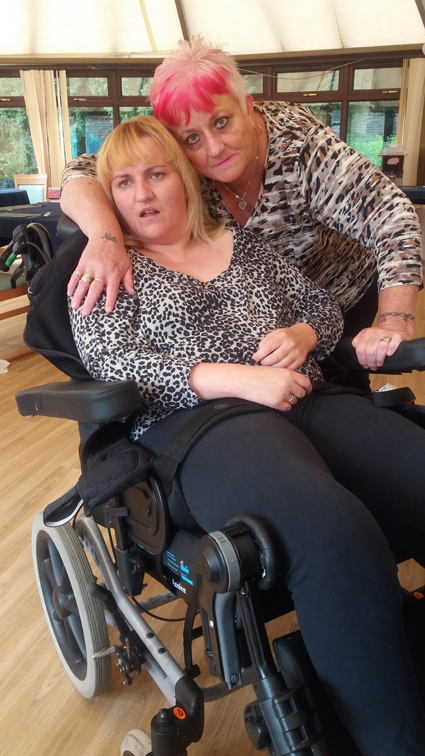 Rita Pepper is a 61-year-old mother from Northamptonshire who is helping Alzheimer’s Research raise awareness of young onset dementia. Her late husband Barry was diagnosed with dementia at the age of 36 and her daughter, Carla Bramall, was diagnosed at the same age. Carla has two children of her own, Mitchell, aged 19, and Honey, who is 12. Rita and her son Lee, aged 38, have had to cope with the emotional and physical stresses of caring for Carla and seeing her deteriorate. Rita shares her story here…

What were the early signs that something might have been wrong?

Carla was getting lost driving around and losing things. My grandson had taken over a lot of the chores. He was ordering takeaways instead of Carla cooking meals and one day I realised he was going out in the car with her, telling her where to go and doing the indicator on the car. I thought: ‘It much’s worse than I thought’. She had had a few crashes and couldn’t explain to me what had happened.

Your husband was also diagnosed at a young age. Did he have similar symptoms?

Yes it was very similar. We hadn’t heard of dementia. We thought he had a vitamin E deficiency as he couldn’t see in the dark and kept getting lost when going to work and getting off at the wrong stops. He was a woodwork instructor and lost his job and went for another job and I heard them say: ‘He can’t even hammer a nail into a piece of wood’. I thought: ‘That’s not right’. The professor at the hospital found a link to the family (for dementia) and it had apparently gone way back, but they hadn’t thought to tell us. They just told my husband it was a brain tumour. We lost him 24 years ago. I lost my brother-in-law too and my nephew is ill as well now. 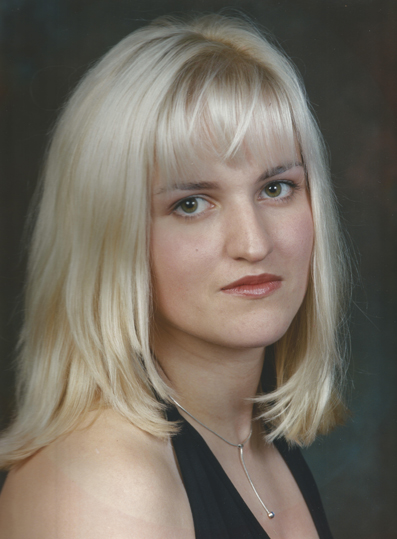 How rapidly has the disease progressed in Carla?

It’s been quite rapid. She’s gone downhill pretty quickly. She’s in a wheelchair now and can’t walk, can’t talk, she has to be washed and fed. She has somebody with her 24 hours a day.

How did she cope with the diagnosis?

We haven’t been able to tell her because she said if she got the same as her dad she would kill herself, so I asked the doctor not to officially say to her that she’d got dementia; they just put it down to nerves in Carla’s eyes. One day I believe the doctor did tell her and she was heartbroken but by the time I got to the hospital she had forgotten. I thought: ‘Why put her through the pain of knowing for her to forget ten minutes later?’

How often do her children see her?

It is upsetting for the kids. I don’t push them. They go when they want to. I don’t want to give them bad memories.

How did you get involved with Alzheimer’s Research UK?

My son and I go to a yearly meeting in London about rare dementias and we got chatting and they asked me if I would mind doing an article about Carla to raise awareness. We both said: ‘Yes if it raises awareness’. People don’t believe you when you say what’s wrong with Carla because of her age and we just want to make people aware that it does happen in younger people. There is no place set up for them, just old people’s homes. There isn’t a facility for the younger person.

What kind of support would make a difference to you?

Somebody to listen to us and offer advice just so that we don’t feel so alone. Before Carla went into the nursing home she and the children came to live with us and there was so much to do… bank details, filling forms in, she couldn’t do any of that. The paperwork is a nightmare. 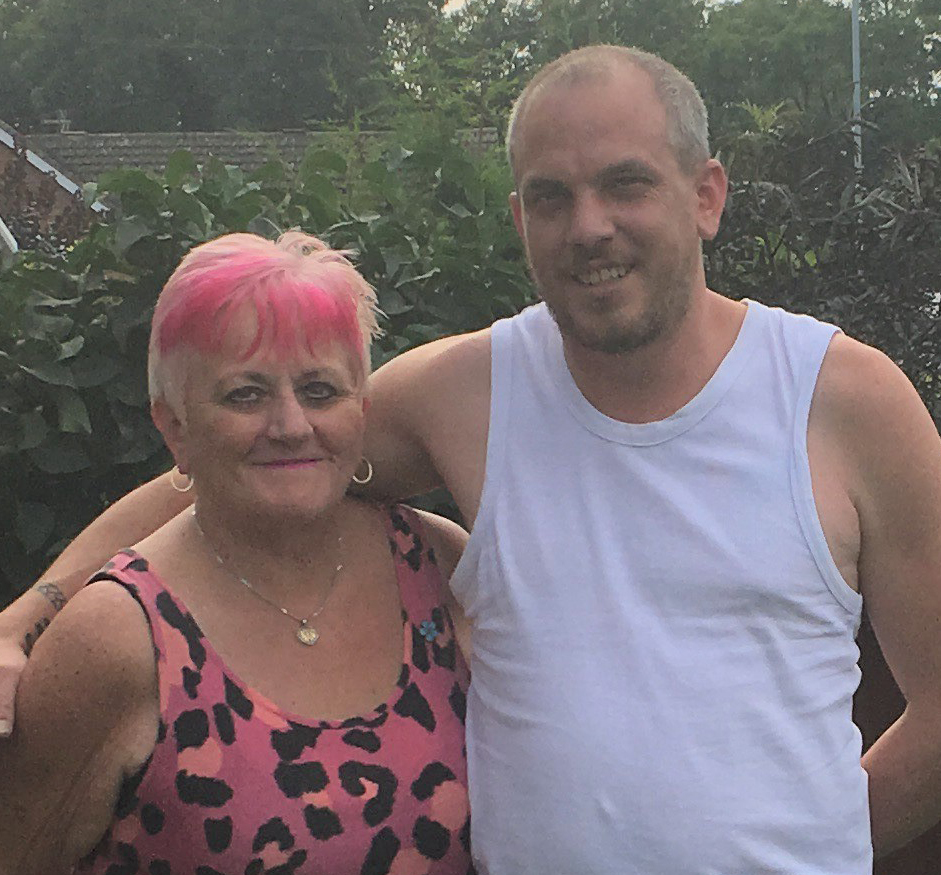 How is your son Lee coping with the situation?

He’s like a rock, he’s amazing. But he’s suffering from severe anxiety. He always thought it should be him. It could have been Lee, it could still be, but he’s seen the professor in London and he has more or less said Lee is fine.

What would your message be to anyone who wants to understand more about what you’re going through?

Just try and be more understanding and supportive. Since the diagnosis, Carla hasn’t seen any of her friends which is a real shame. The support network is just not there.

All I can do now is sit and hold her hand. I try and talk to her and make eye contact but I think her sight is affected too. I have to be straight in front of her, she doesn’t know where I am if I stand to her side. People say I’m a very strong person but I’m not. When I go to see Carla, I do put a face on, but I cry my eyes out when I get home because I know no matter what I do it’s not going to change anything. It seems so cruel and unfair.

Rita has set up a Virgin Money page to raise funds for Alzheimer’s Research UK. Click here for more information