My mum’s dementia has entered a new phase. It happened almost overnight. One day she seemed chatty and friendly, the next a detached, zombie-like figure capable of only minimal interaction. I’ve no idea why the change seemingly occurred overnight, but my immediate fear was that she might have suffered another mini-stroke, which can occur in cases of vascular dementia. However, the nurse examined her three times and all of her vital signs, including oxygen levels in the blood and blood pressure were fine. ‘So why the sudden change?’ I asked the nurse, not satisfied with the suddenness of mum’s decline. The nurse steered me into a corridor, away from where mum was sitting, staring vacantly at the television with a blank expression. The nurse placed a hand on my arm. ‘She’s deteriorating. The dementia is getting worse. It’s the next stage of the illness. Now is the time for acceptance.’

My mother has had vascular dementia for approximately nine years. I knew things would only go one way. I was prepared for the day when she wouldn’t recognise me. Or so I thought. But to go overnight from having albeit jumbled interaction, to having nothing other than a blank expression greeting me seems so sudden, and I don’t think anything can prepare you for that.

I admit I am now fearful of the future. I thought our hardest challenges were behind us. Mum lives in a nursing home and receives very good care, so all of her needs are 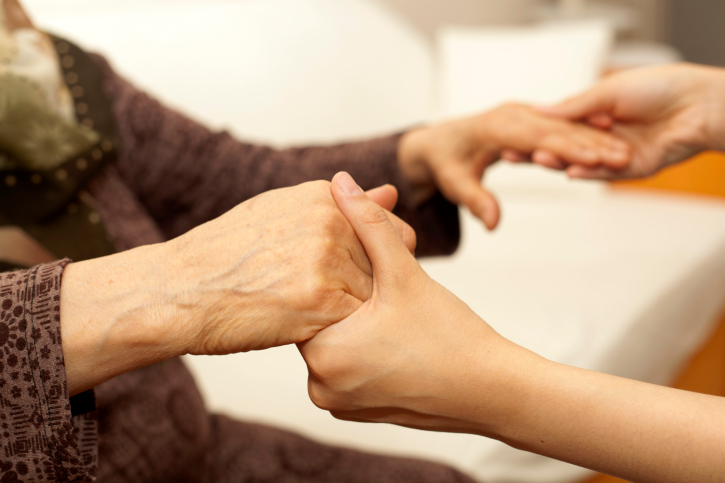 being met and she’s not at risk of falls. Gone are the days when we struggled to make it work between us when she lived at home alone. Now though, my biggest challenge is looming. Mum is declining. Visibly and verbally. Some of the residents in her home do nothing but stare into space. Many of them have to be fed. They no longer speak. Do I want that for my mum? Of course not, but I’m not quite ready to let her go either. There’s never a good time to lose someone you love.

On the other hand, it might be worse to watch her decline. The idea of seeing her sitting in a chair, staring into space like a zombie – existing, rather than living, fills me with dread. Is this how it’s going to be from now on, or is there a chance she may have a few more good days where she can speak and show some of that determined Irish spirit? Only time will tell.

I’m struggling to get used to dealing with this detached person who looks like my mum, but doesn’t appear to be her. My mum was never the most patient, placid person. Before she had dementia, she never held her opinions back. She used to hate football, so seeing her vacantly stare at the recent European football matches without reacting angrily about ‘overpaid’ footballers made me sad. She would never have watched the football before. She was outspoken, sometimes even rude. I think I’d like to see that brash, outspoken nature, just a few more times, before letting go. She wasn’t perfect, but she was my mum. And I miss her.

I’m trying to find a positive in this situation. There isn’t much to be positive about. But I am grateful for one thing; mum and I have had the best relationship we’ve ever had over the last few years. I’m more patient and mum is more placid. We’re good friends. Even though she may not always remember me, and conversations may be a thing of the past, I’m grateful for the closeness we’ve had in the past few years.

But knowing when it’s time to let go, and accepting that the person you love isn’t coming back, is a work in progress for me. I’m doing what most people do at this stage. Throwing myself into my work. Writing about the situation – which also helps. And vowing to lead my own life to the full. I owe that to mum. If she has taught me one thing, it’s that life is for living, and we must live the life we want, while we still can. We owe it to ourselves and to those who can’t.