The Alzheimer’s Show’s Online Editor Christina Macdonald reflects on the challenges of caring for her mum, Hazel Neal, who was diagnosed with dementia six years ago

My mother was first diagnosed with vascular dementia in 2009, though I suspect she’d had the illness for a couple of years beforehand. I’d known for a while that something wasn’t right, but she refused to see her GP and dismissed my fears. She blamed her memory loss and increasing confusion on the stress of caring for my late father, who died in November 2007. Some people think that the death of a spouse can ‘accelerate’ the progression of dementia, though I personally believe it’s because the dementia becomes more apparent without their support. Although very ill, my father was mentally sound and able to remind her to do certain tasks. Caring for him also gave her a focus. When he died, she seemed lost.

At first it started with memory lapses, like forgetting I was going to visit or asking the same questions several times. As the illness took hold, I learned not to point out that she was repeating things, though mum was sometimes aware that she might be doing it. ‘Did I just ask you that?’ She would say. I would nod silently. ‘I’m sorry,’ she would reply. ‘I must be driving you mad.’ My answer? ‘It’s OK. You can ask the same question as much as you like, so long as you don’t mind the same answer!’ Sometimes she would even laugh at that. It really depended on what mood she was in. 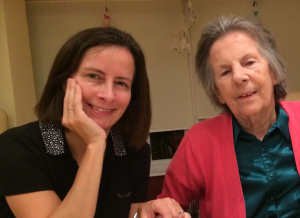 Refusing help
During the earlier stages of mum’s dementia, we faced two main struggles. The fact that she denied having dementia and thought it was just a memory problem (which she blamed on ‘old age’.). This meant she refused to accept that she needed help coping with daily tasks. The second problem was that I lived more than an hour away and could only visit her at weekends, so she spent a lot of time alone. Without any mental stimulation most days, she began to deteriorate.
At first I respected mum’s wishes when she insisted she didn’t need any help. But when she began to lose weight, I had to do something. She was living on a diet of chocolate and cigarettes and not eating proper meals. She became very thin. I contacted social services and arranged for her to have Meals On Wheels. On the first day, she rang me and told me she hated the dinner. I asked her to persevere and leave it until the end of the week before making any hasty decisions. By the end of the week, she’d decided she liked the puddings! When she had a regular hot meal every day, she began to gain weight and look healthier.

I also contacted Age UK, who arranged for her to have a cleaner. Mum refused at first but I insisted. It would have been insensitive to point out that the house was dirty so when she asked me why it was necessary, I told her: ‘I’m worried you might fall when trying to vacuum the stairs’. Somehow that made it seem more acceptable to her, whereas telling her the house wasn’t very clean would have upset her.

Daily care
Having meals delivered daily and a cleaner twice a week helped her tremendously. She enjoyed the cleaner’s company and frankly I was relieved that someone was looking in on her every day. However, as her health got worse, I had to increase her home care. Some days she just didn’t want to get out of bed. I arranged for a homecare agency to get her up and washed and dressed in the mornings, and then put her to bed in the evenings. She was angry I did that and used to get aggressive with the home care staff. But it was completely necessary to keep her safe and well.

As her health got worse, I kept increasing her care. Eventually it reached the point where she couldn’t be on her own. One night in December, she was found in the street without a coat at 10pm. She was clearly confused, and was unable to explain where she lived or what she was doing.

That incident was the turning point for me. I realised she couldn’t be alone any longer. Mum now has 24-hour care and is well looked after. Her dementia has reached the point where she can no longer articulate sentences properly. Most of her dialogue is jumbled. She’s also lost her ability to do many daily tasks that most of us take for granted and does random things like pouring an unwanted cup of tea on the carpet. She needs help with everything. She’s also forgotten that my father has died and often asks where he is. However, at this stage, I’m thankful she still knows who I am. I am sure it won’t be much longer before she doesn’t remember me. Until then, I’m counting my blessings.

Should you take a person with dementia on holiday?