Young Carer, Ryan Matthews-Robinson to Speak to The Alzheimer’s Show Visitors about Positive Impact Dementia can have on Grandchildren

Ryan Matthews-Robinson, of South Croydon, is to present his own story about the impact his grandmother, Maureen’s dementia has had on him and his family on Saturday 17 May at The Alzheimer’s Show, London Olympia.

Forced to accept that his grandmother’s health was in rapid decline and that this was having a significant impact on the wellbeing of his granddad, Robbie ‘King’ Robinson, 73, Ryan, now 25, fast realised that he needed to offer them both support.

More than anything, Ryan’s grandparents needed his time and attention to prevent the isolation setting in that can be the greatest burden for carers of someone with dementia.

“I started to realise how bad Nan was and so began spending more time with her and my granddad. In some ways my Nan’s illness has been positive for me. It has made me less selfish as a person and it has motivated me to turn a negative into a positive,” explained Ryan ‘Junior’ Matthews-Robinson.

The common ground Ryan shares with his granddad is music. Robbie moved to London from Jamaica when he was 21. In Jamaica he had been a music producer.

“Granddad and I didn’t plan to make a record, it just happened naturally through our shared love of music and the time we were now spending together. I want to share my own experience of living with dementia in the family with other families and young carers at The Alzheimer’s Show, to let them know that it is important to spend time with those living with dementia and to continue to enjoy being a family, even if relationships have to change,” continued Ryan. 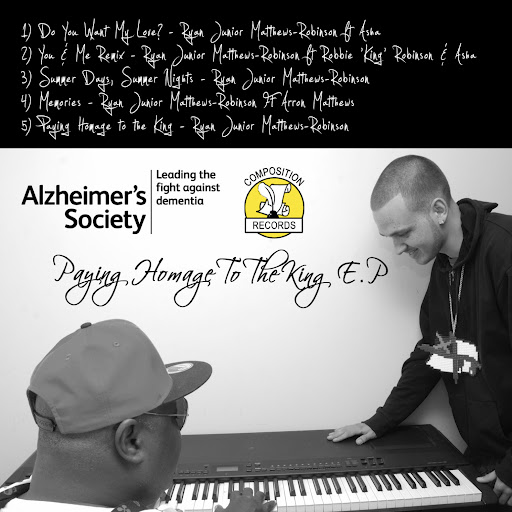 After a period of playing music together, Ryan who is also known by his rapper name Ragz-CV, and Robbie put together an EP called Paying Homage to the King and then later a second track, Summer Days/Summer Nights.

Ryan has been selling his music online and he also had great vision and teamed up with Co-Op stores around London (he works for Co-Op) who let him sell his CD in their store. A percentage of proceeds are going to the Alzheimer’s Society.

Additionally, in the last two years, Ryan has become a young ambassador and is in the process of setting up his own youth charity to encourage other young people to make the most of their skills and to turn their own negative experiences into positives. Ryan wants to go into schools and colleges across South London to inspire young people to do good work for charity.

Ryan Matthews-Robinson is just one of many carers who will be telling their stories at The Alzheimer’s Show at London Olympia on May 16 and 17.

Is there a way of living a good life with dementia?