Technology at the show

There was much to see and do at The Alzheimer’s Show this year, with talks and speakers covering a wide range of topics, offering advice, support and information for professionals, carers and those living with dementia. It was an interesting place to be for those considering using technology to help them cope with dementia.

A personal highlight of the show for me was the Tovertafel, a ‘Magic Table’ designed in the Netherlands to improve quality of life for those with moderate to severe dementia. Just to be clear, the item isn’t a table as such – it’s a box suspended from a ceiling that uses infrared sensors to detect movements of arms and hands. It also contains a projector that projects light animations of moving images on a table and has several different games, including ones where users can move fish, butterflies and flowers. It can be used on any table.

John Ramsay, Director of the UK distributor, says: ‘The Tovertafel (Magic Table) was designed in the Netherlands during the PhD research of Hester Le Riche in order to improve the quality of life of people living with dementia, by decreasing their passivity through a playful platform that stimulates both physical activity and social interaction. There was an overwhelmingly positive reaction at the Alzheimer’s Show this year.’ 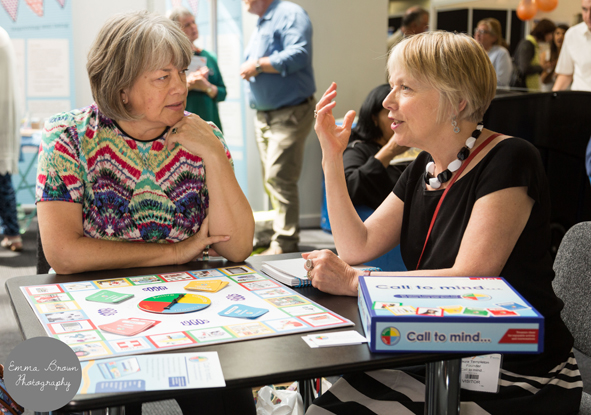 The game is intended to stimulate physical and social activity in older people living with dementia and create a reaction to get them to engage in something that will stimulate the mind. I love the idea of this product, as my mother, who has mid to late-stage dementia, now lacks the ability to communicate clearly with others. She spends most of her time watching TV rather than doing things, and a product like this would encourage her to use her mind and provoke a reaction to the images appearing on the table. I think it would also boost her mood. I hope her care home invests in one in the near future! This product has only just been made available to care homes in the UK and the creators are hoping to roll it out nationwide in the near future. John Ramsay adds: ‘At the show a lot of people living with dementia came along and played, including with their grandchildren, which illustrated a wonderful re-connection of the generations.’ The games can be adjusted to suit abilities. It has to be seen to be fully appreciated. A video demonstration on the Tovertafel can be found at https://www.youtube.com/watch?v=77QStv3OF68 www.activecues.co.uk and care homes can order one via email at info@activecues.com or by calling 07533 386386.

Other personal highlights included Rempods, pop up reminscence rooms that can turn any care space into a therapeutic and calming environment for those affected by dementia. The Pop up environments are designed to take people back to their earlier lives, and include a 1950s living room, a vintage pub, a vintage cinema and a pop-up beach. There’s also a dementia-interactive wall featuring an authentic train carriage with a framed window playing hours of scenic countryside footage, as if you were in the train. These are largely used in care homes and more information can be found at http://www.rempods.co.uk

Other highlights? I’ve always been one for cuddly toys and most importantly, so has my mother, who loves animals – so I was delighted to have the chance to buy her a purring kitten from Rompa’s stand – the kitten was scarily realistic. Rompa has a range of activities, games and memory boxes for those living with dementia. www.rompa.com 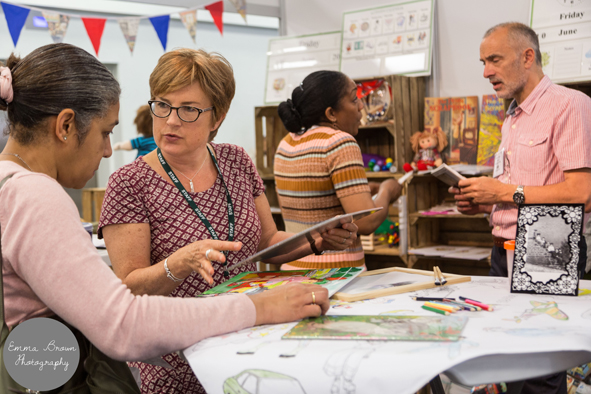 I was also impressed by the RemindMeCare stand – these people have tirelessly developed software called ReMe that can be used in care homes and is intended to build a profile of those living with dementia. The principle is simple; the more carers know about the past history of the person, the more chance they can connect with that person. ReMe matches the profile of the person with automatically sourced Internet content so that carers can get to know the person better. Simon Hooper from RemindMeCare says: ‘There’s one person in a day care centre near us with mid-stage dementia. He wasn’t talking much. He kept saying the word “tank”. Care staff put in the word “tank” into the reminiscent session player and it brought up different varieties of tank including a military tank as well as plumbing tanks and he said: “Ah, MK 46B9327” which the carer very quickly put in. Up came a military tank and he started talking about his time as a tank gunner post the Second World War in Germany. The system automatically sent that reminiscent session out to family members who explained he was in the war. They uploaded pictures of him during that time. A line of communication was established. So the relationship with him and the carer grew. She got a sense of satisfaction. We call it a nugget of knowledge that surfaced.’

It’s easy to see how ReMe could help carers build stronger relationships with those living with dementia. And if it gives those affected a chance to talk about their past and open up, then it’s a good thing in my view. More information at http://www.remindmecare.com