Forget about the present, focus on the past

Talk to your parent about the past and you may be surprised by how much they come to life, says Christina Macdonald

How much do you know about your parents? I ask because it occurred to me the other day while visiting my mum that I didn’t know a great deal about her early life. Dementia has little to offer in the way of positive experiences, but if there are any strange perks to this awful disease, then perhaps hearing more about my mum’s early years was one of them.

My point here is that it’s easy to think of our parents as parents, rather than human beings. We look up to them, aspire to be like them, admire them, or in less fortunate circumstances, we might even resent them. But they are usually prominent figures in our lives, for whatever reason. But how much do we know about what they were like before they became our parents?

My mum is in the mid to late stages of vascular dementia. Before she became ill, she rarely talked about her early life. She would talk a bit about growing up during the Second World War, but any information about her teenage years was scarce. 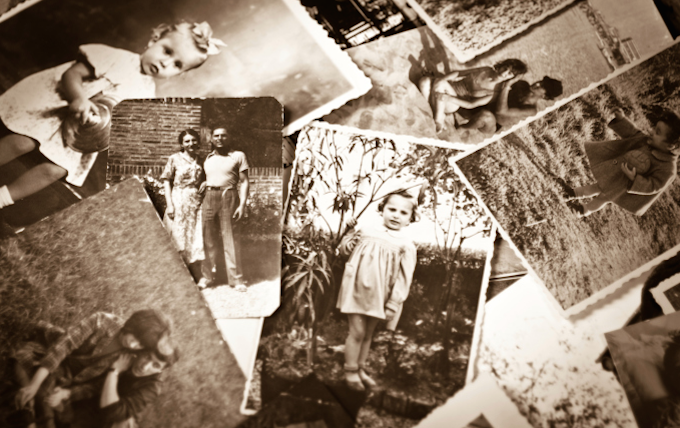 Current events
Now that she has dementia, it’s very hard for her to talk about the world we live in today. She used to have opinions on world events and strong views. Now she can’t follow the news, read the papers or follow a TV show. She can’t comment on world events or current affairs, or even understand when I try to tell her about what’s going on in the world or what other close family members have been doing. This means that many of my visits contain long silences, too many in my view. We spend too much time staring at the TV or struggling through fragmented conversations.

Conversations are very short, one-sided and often she can’t understand what I’m saying or her comments don’t make sense. It can be frustrating for her when she tries to say something and I don’t understand her, because she can’t articulate her words properly. At this point, if you asked my mother even a simple question about the weather she would probably mix her words up and say something strange that bears no relevance to the question.

Back to the past
Yet strangely, if we take the focus away from the present and she is encouraged to talk about the past, she becomes more articulate, and much happier. When she was a teenager, she used to love ballroom dancing. If I ask her about where she used to go dancing, or whom she went with, most of the time she can answer in complete and clear sentences. And she’s very happy to talk about it. Once she has opened up and talked a bit about her dancing, I will ask her advice on how to dance. She’ll give me a few tips about certain moves or good posture. Her advice makes sense. She feels valued and worthwhile because someone is asking for her advice and it also takes her back to a happier time. We get to have a proper conversation.

The other benefit of doing this is that you get to learn more about your parent or loved one, while you still can. You often find out you have more in common than you might have realised. My mother used to be shy at school and found it hard to make friends. I used to be the same. I didn’t know this until recently.

I also got to find out more about her relationship with my late father. She told me about when they first met, how they met and what her parents thought of him. I learned a great deal about my parents.

I also got to thank her for being a good mum, which is something I’ve never done before. We didn’t have the closest relationship when I was growing up. We were both stubborn, so we used to argue regularly. I don’t think I ever once thanked her for doing her best for me and giving me a chance to lead a good life. Now I’ve had the chance to do this, while she can still understand what I’m saying. And she appreciates my advice.

If you’re caring for a parent or elderly relative with dementia, talk to them about their previous pursuits or hobbies. You may be surprised by just how much you get back and how much they open up. It’s a win-win situation for everyone.